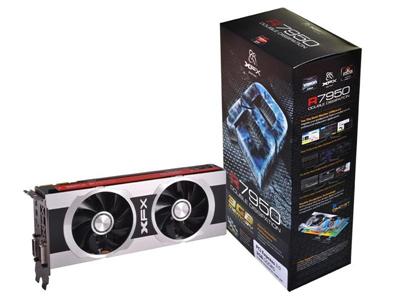 The AMD Radeon HD 7950 graphics processor harnesses the visionary GCN Architecture. As the 28 nm GPU, this chip is primed to enable astonishing performance and breathtaking image quality, making it the only solution for gamers who expect the best.

XFX's unique dual fan design allows air to cool everything including the thermal, GPU, heatsinks, components and the PCB board.

Full enclosed thermal covers often trap heat inside of the card and doesn't allow for airflow to exhaust out of the sides, causing a bottleneck effect at the bracket exhaust. Ghost Thermal Design is a floating cover that allows air to travel freely as it cools the PCB and components directly.

HydroCell Technology is based on the same principles as heat-pipe technology. A liquid coolant is vaporized by a hot surface with the resulting vapor condensing on a cold surface, which recirculates back to the hot surface. The recirculation process is controlled by a wick system. The coolant is water, but because the chamber is evacuated to a very low pressure, the Hydro Transport process of vaporization occurs at a much lower temperature than the normal boiling point. The complex wick arrangement inside the module controls the flow of water and water vapor so that the system can be used in any orientation.

XFX Fans are designed to use linear fan speed ramping controls so that fan speeds and temperatures are optimized to reduce excess noise.

XFX SecureTray solution replaces traditional X-Grip mounting solutions which could cause delimitation (separation of the GPU from the PCB) due to heavier heatsinks.