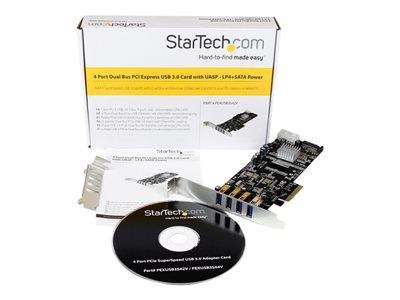 When multiple devices are connected, traditional single bus USB 3.0 cards share your maximum bandwidth between all ports. By employing a second host controller chipset, the transmission channel is shared across two ports rather than four. Dedicating up to 5 Gbps for each set of two ports reduces performance bottlenecks, and effectively doubles your total available to bandwidth to 10 Gbps.

For high-power USB devices, this PCIe USB 3.0 card includes an optional SATA or LP4 power connector to connect to your system power supply and deliver up to 900mA of power per port to USB 3.0 bus-powered devices (500mA for USB 2.0). The USB 3.0 card also supports USB Battery Charging Specification 1.2 (Apple Mode only), letting you charge compatible Apple devices (iPhones and iPads) faster than a standard USB 3.0 port.

The controller card is compliant with USB 3.0 standards while offering backward compatibility with existing USB 2.0 / 1.1 devices. For added versatility, the USB 3.0 PCIe card is equipped with a standard profile bracket and includes a low-profile/half-height bracket for installation in small form-factor computers.

At the same peak in testing, UASP also showed up to an 80% reduction in required processor resources.