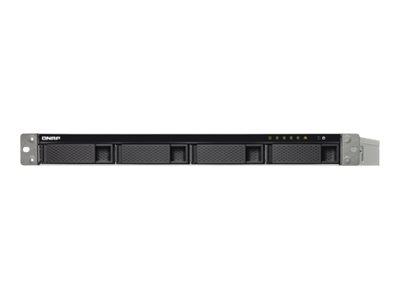 The TS-453BU-RP is a 1U rackmount NAS that easily fits into a standard 19-inch rack, providing an ideal storage solution in the server room for small and medium businesses. The TS-453BU-RP comes with a PCIe slot for boosting potential applications: the QNAP QM2 expansion card can be installed to add an M.2 SSD cache/10GbE connectivity, a compatible wireless card can be installed to use the TS-453BU-RP as a wireless access point, and a USB 3.1 10Gbps card can be added for easier backup to/from multiple external storage. The TS-453BU-RP also provides a wide range of value-added features: 4K video playback and real-time transcoding; deployment of virtual environments through Virtualization Station and Container Station; centralized management of remote Windows®, Linux® and IPMI-compatible devices with QRM+; and web automation services with IFTTT Agent.

QM2 expansion card rede?nes NAS function
QNAP's QM2 is a PCIe expansion card that features dual M.2 SSD slots and 10GbE connectivity* (individual cards may vary in functionality). This allows users to easily set up SSD caching or to enable Qtier auto-tiering technology to optimize NAS performance. 10GbE-compatible models can also future proof the TS-453BU-RP for use with 10GbE networks. Equipped with a dedicated cooling module, the QM2 can maintain its high performance even when tasked with the highest workloads.

SSD cache acceleration
The TS-453BU-RP supports SSD caching. Users can install an SSD in drive bay 1 and bay 2 to boost IOPS performance of storage volumes. It is perfect for improving the overall workflow of IOPS-demanding applications and allows the best of both cost and performance by combining SSDs with HDDs. Coupled with Qtier™ auto-tiering technology (which now supports "On Demand Allocation Priority"), users can customize storage allocation to best suit their system environment and application demands.

Data backup, recovery, and synchronization
Hybrid Backup Sync provides a well-rounded solution for data backup, file synchronization and disaster recovery for you to easily and securely backup data from your NAS to several local, remote and cloud storage spaces. In the event of system crashes or critical hardware failure, you can quickly restore data from these storage spaces, minimizing downtime and reducing overall loss. Hybrid Backup Sync also takes advantage of cloud storage for one-way sync of your data to cloud storage through RTRR, rsync, FTP, SMB protocol, or two-way sync your NAS with remote NAS/cloud services.

Datastore for virtualized environments
The TS-453BU-RP is an iSCSI/ IP-SAN storage that supports VMware® and Citrix®, and is compatible with Microsoft® Hyper-V® and Windows Server 2012® R2, fulfilling the need for flexible deployment and management in virtualization environments. The TS-453BU-RP supports VMware VAAI and Microsoft ODX to increase performance by offloading server loading for ESXi server and Hyper-V respectively, and supports QNAP vSphere Client plug-in and QNAP SMI-S provider with enhanced operational efficiency and management in virtualization applications.

Secure access with VPN & Proxy Server
The new QVPN combines VPN server and VPN client functionality. Through QVPN, the TS-453BU-RP can be used as a VPN server with L2TP/ IPsec, OpenVPN, and PPTP support, allowing you to securely access data shared within the private local network. The TS-453BU-RP can also be used as a VPN Client to connect to other VPN servers or virtual private network through PPTP and OpenVPN for secure data transmission. VPN Client also allows your NAS to connect to multiple servers at the same time. You can connect your devices to your NAS and the VPN server at home to access data on the LAN and via VPN Client on your NAS, you can connect to international VPN servers for accessing regionally-restricted services such as Netflix and Hulu in HD Station. The TS-453BU-RP provides you with various VPN options and helps secure your data transmission.