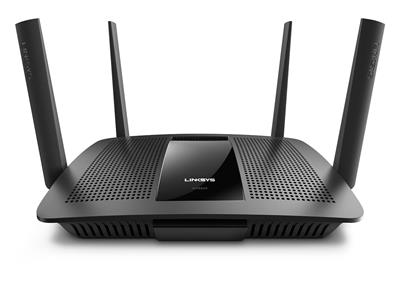 The Linksys EA8500 AC2600 Simultaneous Tri-Band Broadband Wireless-AC Router is designed to take your wireless network to the next level with the latest in wireless technology. Using the latest tri-band 802.11ac Wireless Technology the Linksys EA8500 is capable of speeds up to 2533Mbps. Packed full with features, the Linksys provides ultimate wireless range due to high power amplifiers and MU-MIMO technology.

The next level of online gaming and streaming
Take your gaming and streaming to the next level with the Linksys EA8500 AC2600 Wi-Fi Router. This Linksys EA8500 is equipped with a 1.4 GHz dual-core CPU and features MU-MIMO technology, so it can handle heavy-bandwidth activities and heavy network traffic at a combined speed of up to 2.53 Gbps, making it the ultimate in fast Wi-Fi technology.

Latest 802.11ac WiFi speeds
With wireless speeds of up to 2533Mbps (2.5Gbps), the Linksys EA8500 offers the fastest point-to-point speeds available. And unlike traditional routers that deliver two or three data streams, the Linksys EA8500 uses 4x4 AC--the latest in Wireless-AC (802.11ac) technology--to deliver four simultaneous, independent streams of data at speeds up to 2.53 Gbps, six times faster than Wireless-N. Ideal for streaming HD videos and playing online games, this router delivers blazing speeds and uninterrupted connectivity. As a result, you can enjoy online gaming and video streaming without annoying lag or buffering.

Using the Wireless-AC standard, the Linksys EA8500 also delivers innovative beamforming technology, enabling the router to strengthen the wireless signal to specific devices, rather than simply send out Wi-Fi in a general direction. Now you can experience faster network speeds, better wireless range, reduced interference from other devices, and stronger Wi-Fi connections.

Supercharged CPU
With the Linksys EA8500, you can enjoy the latest in speed and performance--whether you're playing online games or streaming music or HD videos--thanks to our 1.4 GHz dual-core processor. This enterprise-class CPU revs up throughput to wired and wireless devices alike and promotes simultaneous high-speed processing, making it great for downloading or transferring large files or performing other data-intensive activities.

High speed ports for wired connections
To provide the fastest possible wired performance, we equipped the Linksys EA8500 with four Gigabit Ethernet ports, which are 10 times faster than Fast Ethernet. Using the USB 3.0 port, you can add external storage or other devices to share content across your network. For those with an external SATA storage device, the Linksys EA8500 is outfitted with a unique eSATA port for convenience and optimal data transfer rates. For flexibility, the eSATA connection can also serve as a USB 2.0 port.

Four high powered antennas
To provide you with outstanding Wi-Fi coverage and performance, the Linksys EA8500 can reach speeds of up to 2533 Mbps for reduced lag and buffering. Four external antennas project large, overlapping Wi-Fi patterns to remove dead spots and widen the router's range. The antennas can be adjusted to just the right position or detached for future upgrades.